D is for Dubrovnik, Croatia

Dubrovnik, Croatia.  When I visited here in 1969, it was Dubrovnik, Yugoslavia.  At the time the country was known as the Socialist Federal Republic of Yugoslavia and was ruled by President for Life (1963) Marshal Josip Tito.  Tito was in power in one form or another from 1945 until his death in 1980.  Along with the break-up of the Soviet Union in 1991, Yugoslavia was eventually broken into the seven states of Bosnia Herzegovina, Croatia, Kosovo, Montenegro, Macedonia, Serbia, and Slovenia.

Prior to my trip to Dubrovnik, I had certainly heard of Marshal Tito.  Who hadn't at the time?  I had a sorority sister who was Serbian, so I had heard her often complain about her former homeland.  But, I had no idea what to expect when I got off the boat from Greece.  I was certainly in for a surprise upon visiting my first Communist country.

We departed our cruise ship from Piraeus, Greece, Epirotiki's T.S.S. Hermes, and walked into this beautiful white-walled city.  It was not what I expected.  We were in a communist country and my impressions from back home was that everything should be dark and gloomy.  NOT.

I think I was more flabbergasted here than in any other European city, only because it was not what I expected.  We were both very happy a friend had suggested we add it to our itinerary. We were to be here for five days before proceeding to Vienna.  It was a chance to relax and unwind after our two months in Europe with another five weeks to go.

We first headed to our hotel, The Grand Hotel Imperial, now owned and renovated by Hilton.  The hotel was built in 1897.  If it was here in Michigan, we would have just torn it down by now.


We went shopping in the old city.  I was surprised to find American products in the shops.  I remember buying a bar of soap since we had about depleted the supply we brought with us.  Here is an overview of the Old City which is a UNESCO World Heritage site.

We saw a folkloric dance event in an open amphitheatre.  We lay on the rocky beaches and were shocked to see folks sunbathing with little or nothing on.

Me on the waterfront wearing the dress I bought in Athens: 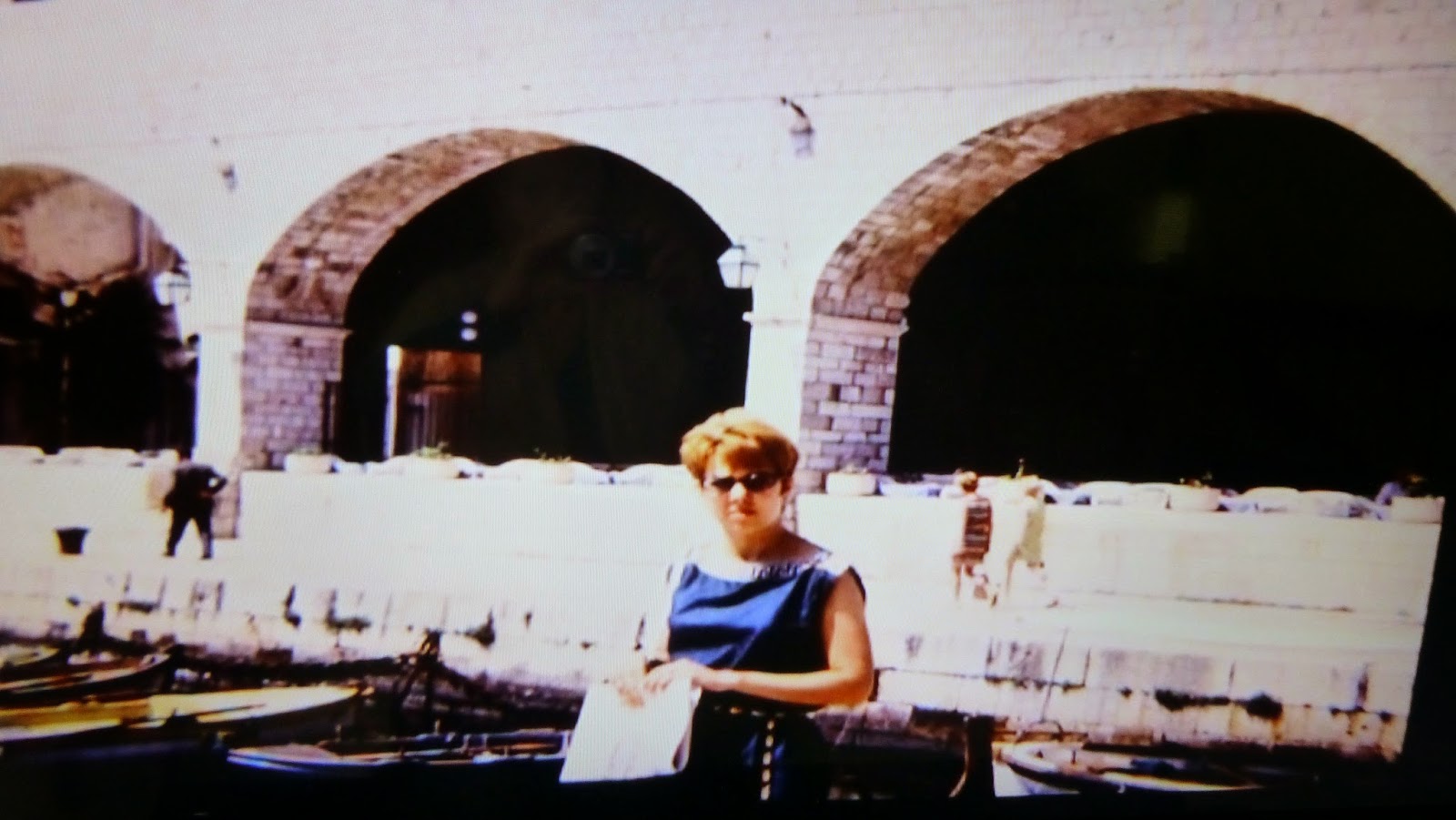 The beach, which was all rocks: 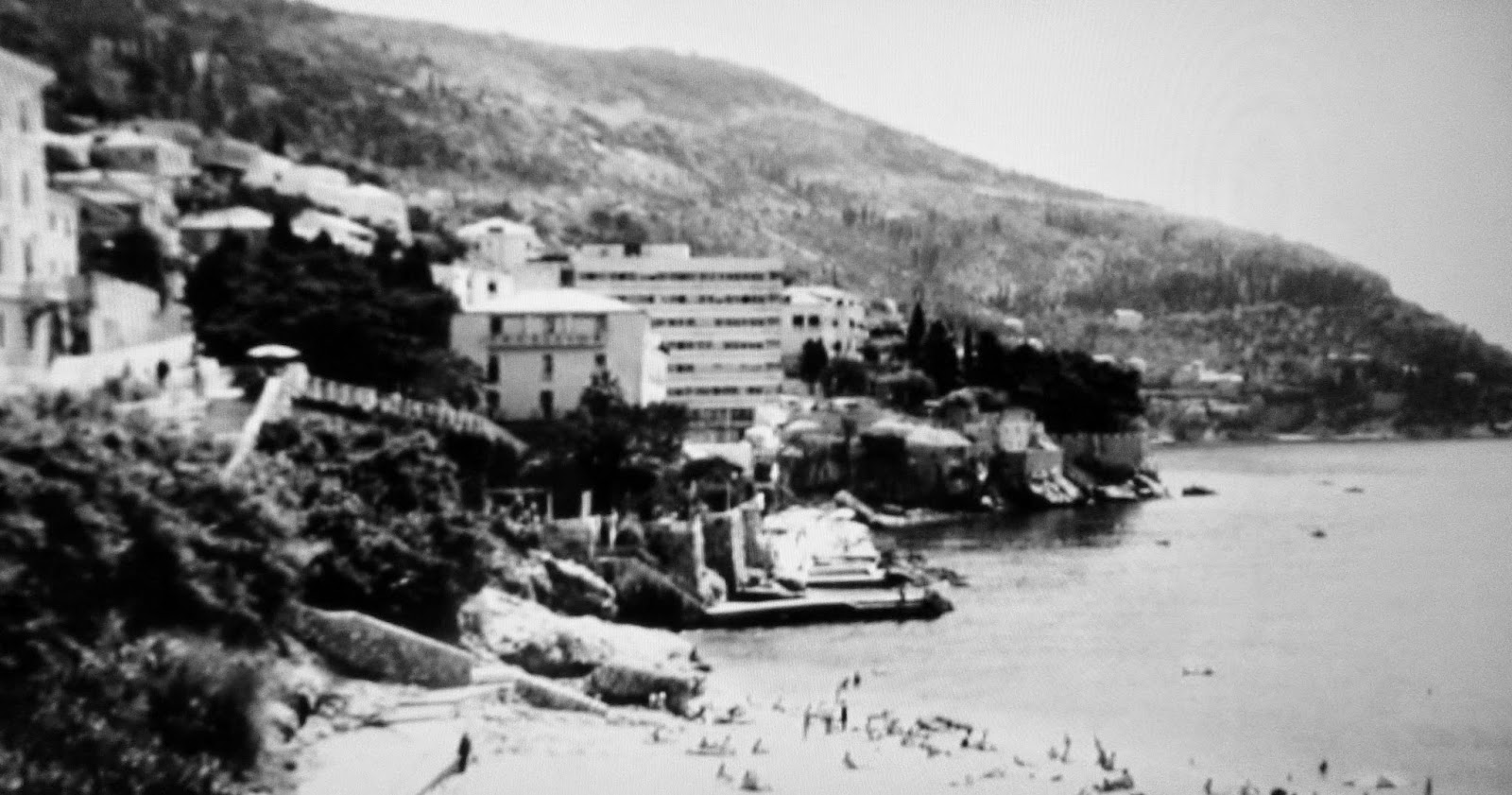 Our five days of shopping, laying on the rocky beaches, getting my haircut, and our hotel and food cost me all of $58.78, including my plane ticket to Vienna via Zagreb.  Travel is not quite as cheap as it used to be.

If I ever run out of new places to see, I will put this on my list of 'places to return to'.  I am sure that it will not be what it was in 1969, but I am sure it would be another great adventure.

D is also for Detroit, Denver, Dakotas, Delaware
Labels: A to Z Challenge, Croatia, Dubrovnik, UNESCO, Yugoslavia
Posted by Denise at 7:22 AM
Email ThisBlogThis!Share to TwitterShare to FacebookShare to Pinterest