Since I live in the Great Lake State, it seems only fitting that I blog about one of our Lakes.  I have actually visited and vacationed on all of them: Huron, Ontario, Michigan, Superior, and Erie.  I've also spent a considerable amount of time on Lake St. Clair. 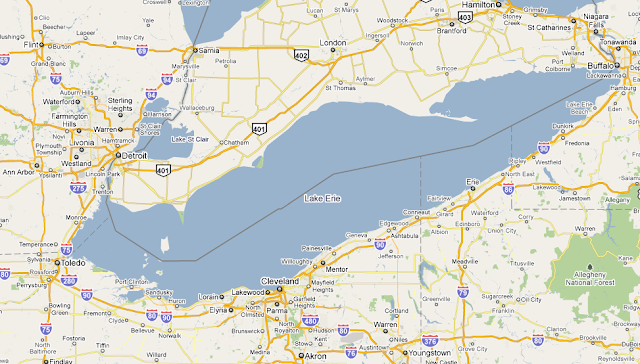 If you drive south out of Detroit on I-75, you will come to Monroe, home of La-Z-Boy Furniture.  The eastern border of the City is Lake Erie and the Port of Monroe is the only Michigan port on the Lake.  The City sits at the lowest elevation in Michigan at 571 feet above sea level.  (West Bloomfield's highest elevation is at 984 feet just down the road from me.)

There is a statue of former resident Major General George Armstrong Custer on Monroe and Elm Streets.

Travel another 14 miles down I-75 and you will arrive at Toledo, Ohio.  I've traveled here just to go to their Art Museum.  It was the closest museum holding the 'Star Wars' exhibit about ten years ago.

Wind your way out of the city and get on the highway traveling along the lakefront, Ohio Route 2.  Yes, it is slow, but you will have a better view and will not have to pay the turnpike tolls! Head for Port Clinton where you can fish, enjoy the beach, or take a ferry to Put-in-Bay.  Mind you I have never taken the ferry there, but I have been there by boat, specifically a 31-foot cabin cruiser I used to own, called 'Treasurer's Island'.

From Port Clinton you have just a short trip to Sandusky and Cedar Point Amusement Park.  The last time I was there my youngest son was in high school and I took him and a friend for the day.  I think I might like to 'rent-a-kid' and go again.  I've driven there and gone by boat.  I love it.  I even enjoy just walking around and people watching.  I've seen just about everything they have there including the infirmary where I was taken after passing out.  That part I do not recommend.

If you are going, there are accommodations on the island and I highly recommend staying there, especially if you are visiting the water park or are going on any waterfall rides.

After your adventure at the park, get on US-6 and head to Cleveland.  If you like rock and roll, this is the place for you, the home of the Rock and Roll Hall of Fame.  I am not even a fan and I have been twice and thoroughly enjoyed it.  Cleveland also has a very nice art museum in the university district.  I have a couple of friends who will tell you to go to a Cleveland Indians ballgame.  I admit that I have been to their stadium.  Fortunately, they were not playing the Tigers when I was there so I could root for them, though not too loudly.
All in all, a pretty cool city with lots of restaurants downtown and great views of the lake while you are there.  But moving along, we can follow the shore all the way to Buffalo.  There are circle tour signs along the way to guide you and you will pass through Erie, Pennsylvania on the way.  You have another opportunity here to enjoy Lake Erie in Presque Isle State Park.

Continue following the circle tour and cross into Canada at Buffalo.  If you are feeling adventurous, detour to the Canadian side of Niagara Falls.  If not, you follow Provincial Highway 3 to Windsor and take the Ambassador Bridge to Detroit.  But don't just drive straight through.  Thirty miles southeast of Windsor is Point Pelee National Park.  This is a must stop for bird watchers in the spring and monarch butterfly lovers in the fall.  I have so enjoyed my visits here just walking and taking in the peace and calm on the boardwalk.

The park does have something in common with the other stops along the lake.  It can get quite cool and windy, even on a good day.  When I was in college, a friend and I came over for the day.  The water was so rough we were body-surfing, not swimming.
Which brings me to my comments about my boating adventures.  I much prefer to make this trip in a car.  Lake Erie is a shallow lake.  I have never been on it when I wasn't being thrown around like a rag doll.  On a trip to Cedar Point with my children they kept their life preservers on and stayed below deck.  I was a wreck.  Every trip thereafter was by car.

And there you have a trip around Lake Erie.  Probably not as exciting as a trip around England or a ride out to Ellis Island, but for me, it is right around the corner.

This is Day 5 of the A-Z Challenge.  I am enjoying writing about past trips that never would have appeared on this blog if not for the challenge.  I have also discovered many interesting bloggers participating in challenge.  Thanks again to Arlee Bird for starting this.
Labels: A to Z Challenge, Cleveland, Lake Erie, Monroe, Point Pelee
Posted by Denise at 12:01 AM
Email ThisBlogThis!Share to TwitterShare to FacebookShare to Pinterest