Back in the 1970's when I visited Maine, I decided that one day I would like to visit Nova Scotia, Canada.  It wasn't until 2005 that a friend and I made the journey.  Of course, only the two of us, who had survived a cruise during the 1999 Hurricane Lenny in the Caribbean, could manage to take a vacation to Nova Scotia during another hurricane, Hurricane Ophelia to be exact.

We flew from Detroit to Halifax.  With the storm quickly approaching we drove off to Peggy's Cove, got out of the car and immediately destroyed one umbrella while walking up to the Peggy Point Lighthouse.

I am sure this looks much nicer when the sun is shining. 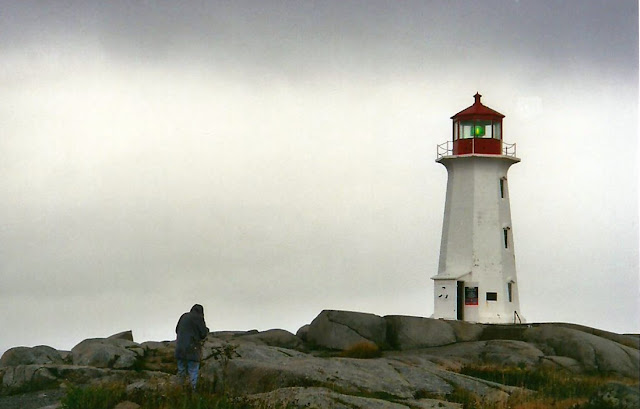 Another attraction here is the William E. deGarthe granite-carved memorial to the local fishermen and their families. 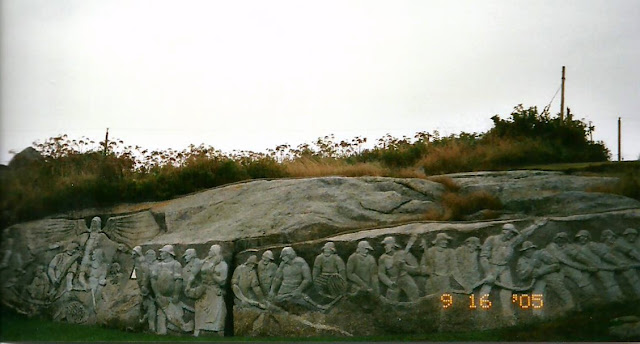 Fortunately, the hurricane moved through Halifax during the night and was headed to Sydney, away from our destination of Port Hawkesbury, where our journey around Cape Breton would begin.  We would drive the Cabot Trail around the peninsula, heading up the northwest side and back down on the southeast side of the island. 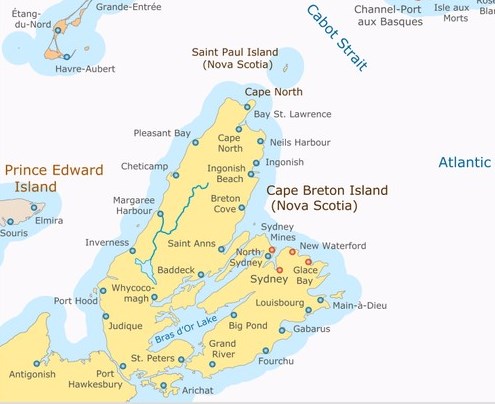 The road ahead was enticing and we were hoping to see some moose (never happened) along with great views. 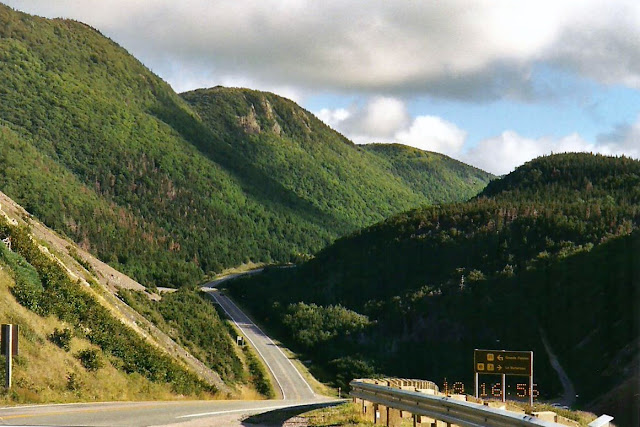 Well, the views only got better as we drove.  Our plan was to spend the day driving and enjoying the scenery until we reached Pleasant Bay where we would go whale watching.  We found many small craft shops.  One in particular was a woodsmith who made beautiful French rolling pins and wooden utensils, which I am still using.  My friend found someone who made salted fish and we drove around with cured salmon, which we kept in an ice bath in the trunk.  A good thing it was not too warm.

Eventually we arrived at Pleasant Bay: 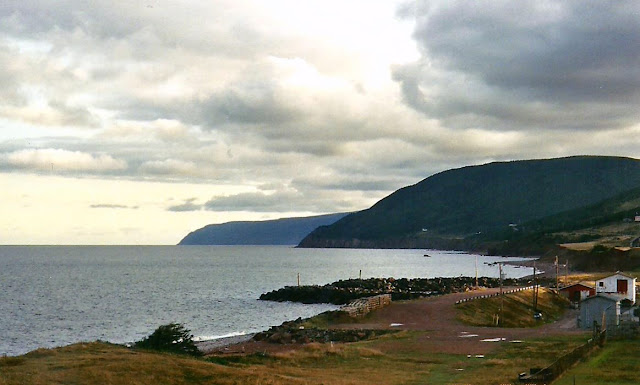 We spent a rocky morning out in the water bouncing around and watching a pod of pilot whales.  It amazes me that they do not knock over the boat.  They are beautiful creatures, but unfortunately all of my pictures do not do any of them justice.

Our trip continued up to Cape North where we met a couple in their 50's who were riding the trail on Harley's.  I was having palpitations just driving on the narrow trail in a car.  Later when the passed us on the road going down the mountain I was really impressed with their daring.

We headed toward Ingonish where we planned to have lunch.  At Lakies Head we stopped and enjoyed the view.  Again. 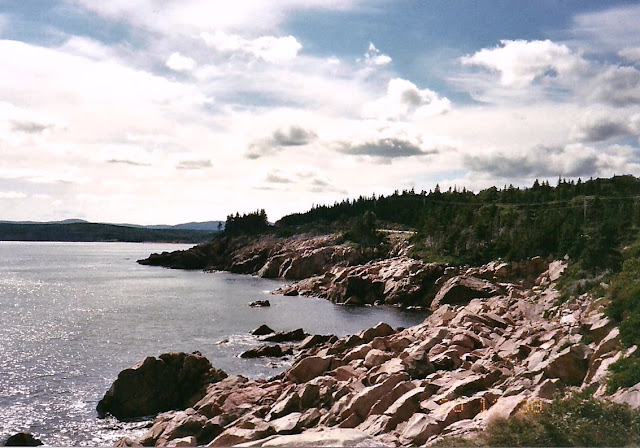 Traveling through this area of the island we found many crafters with wonderful little shops either in or attached to their homes.  There were potters, painters, and stationery makers.

One artist was Suzanne Craig who made these lovely note cards which I still have.  They were so pretty I hated to part with them.

Near Baddeck we visited the Wagmatcook Culture and Heritage Centre where we had a glimpse into the history and traditions of the Mi’kmaq people at the Interpretive Centre.

Our trip continued on the Cabot Trail back to where we started at Port Hawkesbury. From there we continued to Prince Edward Island.

I love vacationing in Canada and have done so countless times,  as you may have noticed in my first post and in previous posts on this blog. I am sure that having family in Windsor and Fort Frances, Ontario may have something to do with it along with being able to get there so easily from Detroit.  If you follow my blog, you also know that I love vacations with beautiful views.  But fear not, during this month I am sure I will find a city to blog about, with museums and shopping and wonderful architecture.

C is also for: Czech Republic, Chicago, California, Colorado, Carolinas, Cleveland, Cincinatti, and Cordenons, Italy where my mother's family is from
Labels: A to Z Challenge, Canada, Cape Breton, Nova Scotia
Posted by Denise at 7:31 AM
Email ThisBlogThis!Share to TwitterShare to FacebookShare to Pinterest