Some of you who have read my older posts may recall how much I hate hearing fireworks.  Not watching the colorful displays, hearing those that just make loud noises for no good reason.  I freak out and sometimes actually sit here and shake.  Someone asked me why and the only reason I can think of is because of this: 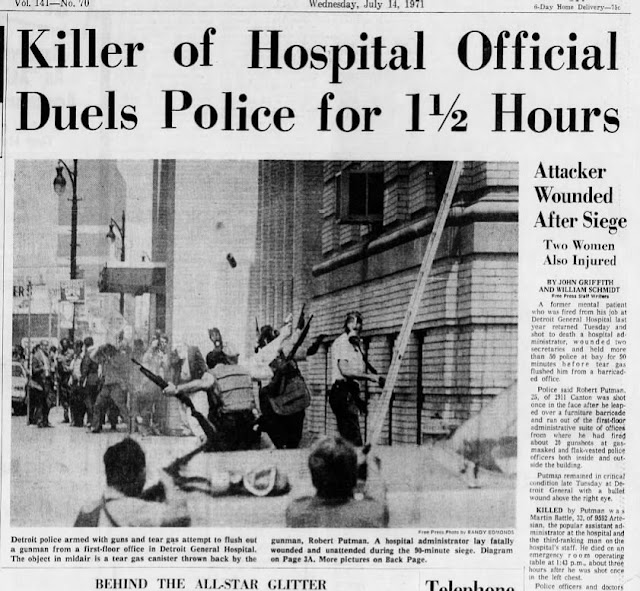 July 14, 1971  I was working in my chemistry lab at the hospital when we were told to lock our doors and remain inside.  We were up on the fourth floor, directly over the gunman on the first floor below us.  I can still remember hearing the shooting and the yelling echoing up from the street.

I thought about that when I watched the television on Wednesday.  Sheltering in place with an active shooter is not something you ever forget.  I remember someone banging on the door saying he was a doctor and to let him in.  Those of us in the lab decided that was not the best idea.  I am not sure where he found shelter.

This afternoon one of my co-workers from back then called and I asked her if she remembered that day.  She did not and said that perhaps she was off because she cannot imagine that she would have forgotten it.  Then again, we are getting rather up there in years.

I am posting this and hoping that our country recovers.  I am just not sure.  And I know it will be many a year before those Capitol workers recover from the trauma and fear.

Posted by Denise at 8:39 PM
Email ThisBlogThis!Share to TwitterShare to FacebookShare to Pinterest