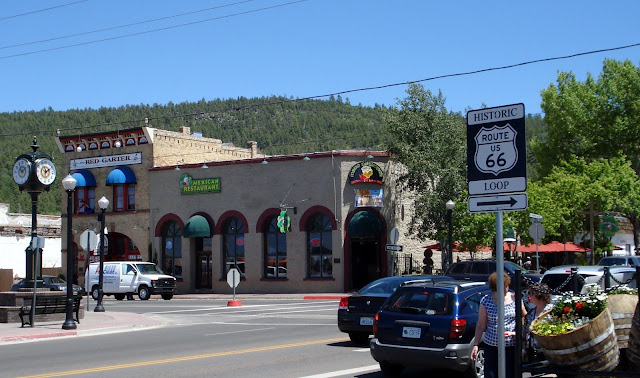 U.S. Route 66 was established November 11, 1926.  It traversed for 2,448 miles from Chicago, Illinois to San Bernardino, California.  It was the road people took to get out west, although I took it to come back home.

The above picture was taken in Williams, Arizona in June, 2010.  It is an actual tourist attraction with folks posing under the sign.  Well, older folks to be sure.  Those of us who remember the TV program 'Route 66'  and the corvette they drove.  And the song as sung by Nat King Cole.

I drove old Route 66 in the mid-1970's (in my Mercury Cougar), when you could still find it in your Rand-McNally Road Atlas.  Now you have to go online to get your directions.

I only drove from Los Angeles to St. Louis, with a detour.  We had headed across the northern states to Oregon, drove the coast highway down to San Diego, and then went back toward Los Angeles to pick up Route 66.

For what sounded like a good idea at the time, we detoured to Nevada to see the Hoover Dam and spend a day in Las Vegas.  Then we headed back south to pick up Route 66 in Kingman, Arizona.  Because we had spent the time in Vegas, we had to skip going to the Grand Canyon, which I had always considered just a 'big hole in the ground', right up until the day I actually laid eyes on it.  WOW.

So, right through Flagstaff, Arizona to Albuquerque, New Mexico, which I only vaguely remember.  Well, I do remember.  Miles and miles of road.  Lots of beautiful open spaces.  Lots of passing big semi trucks going up a hill, only to have them race by you going downhill and then doing it all over again.

In Amarillo, Texas we stopped and ate at a chuck wagon style restaurant.  They still have Historic Route 66 on their maps, running parallel to I-40.

Then it was on to Oklahoma City and Tulsa, Oklahoma and then St. Louis, Missouri.  At that point we'd been gone nearly three weeks on our trip and taking a more direct line home to Detroit from St. Louis looked pretty good to us.  Besides, my husband was raised in Chicago and we had visited there many times.

The last time I was in Chicago I happened to notice a travel brochure about driving old Route 66 from Chicago to St. Louis. I don't know that I will ever do it.  I have driven many miles of the old Route 12 from Detroit to Chicago.  (That roadway was replaced by I-94.)  It is very slow going and even though I am retired, I do not want to spend a lot of my time just 'moseying' along the roadways.


But I still have fond memories of just driving through open country in the mid-1970's and singing that iconic song.  Here is the Nat King Cole version of 'Route 66'.


R is also for Rome, Rocky Mountains, Richmond, VA
Labels: #atozchallenge, Route 66
Posted by Denise at 7:34 AM
Email ThisBlogThis!Share to TwitterShare to FacebookShare to Pinterest