J is for Jamaica

Jamaica.  How did I end up someplace I never planned to go?  It was all thanks to a guy named Lenny.  First name was Hurricane.  Yep, Hurricane Lenny, 1999.  Also known as 'wrong way' Lenny.

We were going on a cruise to benefit DARE, Drug Abuse Resistance Education.  Sailing on the Norwegian Sky, we were supposed to go to the Eastern Caribbean.  We never got to any of the islands and now I can't even remember which ones they were.

Hurricane Lenny came late in the season and instead of tracking East to West, it was tracking West to East, hence no getting to the Eastern islands.

After spending quite a bit of time sailing back and forth on the southern side of Cuba, we were informed that we were able to get into Montego Bay, Jamaica for the day.  We could leave the ship in the morning and return in the evening, even though we had no idea where we would be going next.  There were a lot of boats out there with no place to go in the storm.  This is what you don't want to see on your Caribbean cruise: 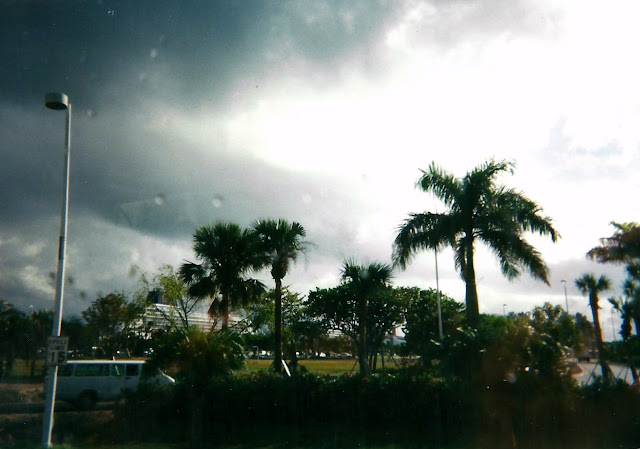 The only reason I would ever have considered going to the island would be to climb Dunn's River Falls.  The 1,000-foot falls are continuously rebuilt from calcium carbonate and sodium deposits in the river. One of the only waterfalls in the world that actually empties directly into the sea, Dunn’s River Falls was used for location footage in both the Tom Cruise movie Cocktail and the James Bond film Dr. No. So, I grabbed my swimsuit and set off on a bus that would take us there.

The ride from Montego Bay to Ocho Rios was in itself an eye-opener.  We traveled through what had to be the poorest areas I have ever encountered on a vacation.  We saw shanties that had been destroyed in a hurricane several years before and had never been rebuilt.  The poverty was heart-breaking.

Finally we arrived in Ocho Rios.  It was like being in another world compared to what we had driven through to get there.

As for the Falls - it was one of the best adventure's I have ever had.  I cannot think of anything that compares to that experience.  It was just so exhilarating!

The resort areas of the island looked inviting.  I suppose if I were a beach person, this might be a place to go - without Lenny or his cousins, of course.
Labels: #atozchallenge, A to Z Challenge, Dunn's River Falls, Jamaica
Posted by Denise at 6:37 AM
Email ThisBlogThis!Share to TwitterShare to FacebookShare to Pinterest