I is for International Falls, Minnesota

I have never actually been to International Falls, but it is in my blood.  My mother was born there in 1921.

My maternal grandfather, Angelo, was born in 1883 in Cordenons, Italy (which was once part of the Austro-Hungarian Empire).  In May, 1913 he left his wife and two daughters in Italy to go to International Falls where his brother-in-law was already working.  The plan was to get settled, save some money, and bring the family over.  Old documents show that he worked in the Abitibi Paper Mills in Fort Frances, Ontario.

Working to raise the money for their passage took time and in 1914, World War I broke out.  He was unable to return to Italy or to send for the family to come to America.  Angelo was not reunited with his family until they came over in 1920, traveling through Quebec, then Fort Frances, Ontario and crossing into the United States at International Falls.  For whatever reason, they remained there until 1923, and thus, my mother was born in what is the coldest city in the continental United States. They moved to Cleveland, Ohio, and my grandfather died there in March, 1925.  My grandmother and her three daughters then moved to Detroit.

This photo is undated but shows my grandparents along with my mother's two older sisters and a cousin.  It is quite possible that my grandmother is pregnant with my mother in the photo. 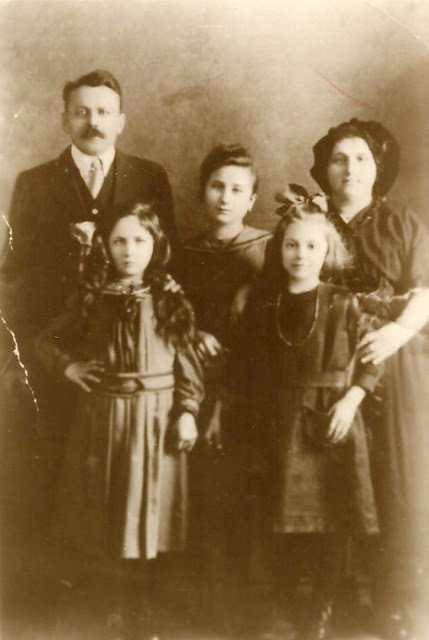 I remember watching the local weather reports on television when I was growing up.  If it was winter, the coldest spot was always International Falls.  As I am writing this on Tuesday morning, the temp there is 16 and here it is 42, but it will not even get that warm there today.  They can keep their claim to fame.

The cold temperatures were all I ever knew about it until the appearance of 'Frostbite Falls'.  The fictional Minnesota small town of Frostbite Falls was the hometown of cartoon characters Rocket "Rocky" J. Squirrel and Bullwinkle J. Moose of The Rocky and Bullwinkle Show. The fictional town was located in Koochiching County as well (International Falls is the county seat of Koochiching).

I loved these guys.  I even had a Rocky and Bullwinkle t-shirt and have the series loaded on my Amazon Prime account for viewing (when I am not sitting here at the computer).
The closest I've gotten to International Falls was 102 miles away in Ely, Minnesota.  There is an International Wolf Center there.  My sister did visit the Falls and Fort Frances, Ontario, which is linked to International Falls by a bridge over the Rainy River.

It will be on my to-do list but definitely in the summer time.

I is also for Italy, a country I've visited from one end to the other, or top to bottom.
Labels: #atozchallenge, A to Z Challenge, Cordenons, International Falls
Posted by Denise at 12:02 AM
Email ThisBlogThis!Share to TwitterShare to FacebookShare to Pinterest