F is for Fallingwater

A vacation trip just to see a house.  Well, not just any house, but a very special and perhaps the most well-known of all Frank Lloyd Wright homes: Fallingwater in Mill Run, Pennsylvania.

Of course, it is pretty well-known that my first career choice was architecture.  (Well, if you knew me in the 50's.)  But after having my drafting instructor repeatedly tell me that women don't get hired as architects, (1950's ideas) I decided I needed to find a career that would put clothes on my back and food on my table.

But my love of architecture remained and I make an almost yearly trek to Oak Park, Illinois to see the Wright homes there.  So, it made sense that having already visited there, Wright's homes in Scottsdale, Arizona and Spring Green, Wisconsin, and many other side visits to his creations around the country, that I should finally see the masterpiece. 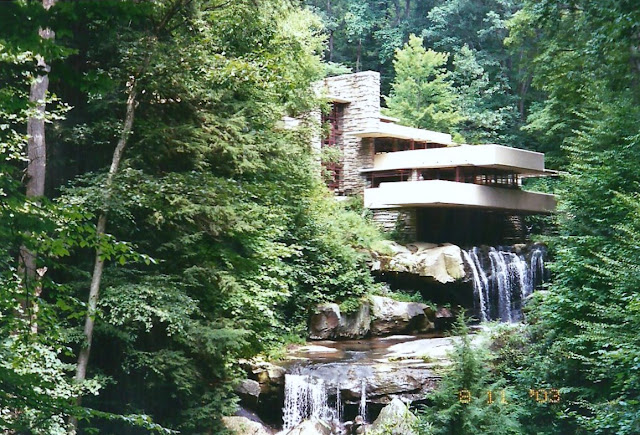 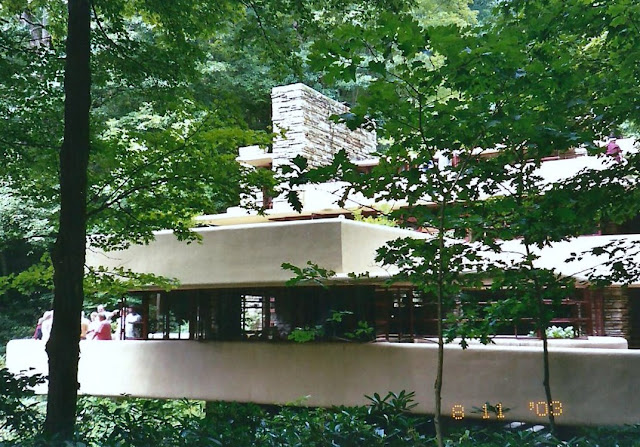 Imagine living in a home built over a waterfall.  Construction of the home began in 1935 for wealthy department store owner Edgar Kaufman, Sr.  of Pittsburgh.  It was to be a retreat summer home for the family.

A trip to Fallingwater need not be the only Wright home you see.  Just down the road a bit in Chalkhill is the Hagan house, known as Kentuck Knob. 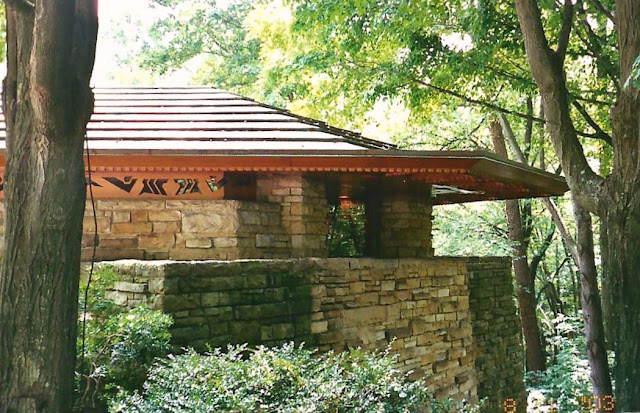 Built in 1954 almost 20 years later than Fallingwater, it shares some of the same aspects.  Both are built into the landscape around them.  And both have teeny, tiny bathrooms and narrow hallways.  At Kentuck Knob, in order for the owner, Lord Palumbo, to put a rocking chair in the master bedroom, they had to remove a window because it would not fit down the hallways.  Thank goodness for built-in furniture.

Traveling home from Mill Run I stopped in Pittsburgh to see the Frick Estate, Clayton.  'F' also brings to mind Frick and then Freer.  I invite you to explore the links if you have an interest in art.

It's been almost ten years since I've seen the home.  Check the dates on the photos.  Driving home on August 14 I was trying to figure out why traffic was backed up as I neared home.  I was less than four miles from home when all the lights went out during the power failure of 2003.  But despite that drama, the viewing of Fallingwater is what will stay with me as the highlight of my trip.

F is also for Florida; Florence, Italy;
Labels: A to Z Challenge, architecture, Fallingwater, Frank Lloyd Wright
Posted by Denise at 12:02 AM
Email ThisBlogThis!Share to TwitterShare to FacebookShare to Pinterest