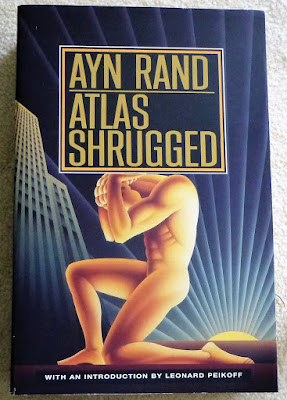 'Atlas Shrugged' was not the first Ayn Rand novel I read.  'The Fountainhead' was first.  I saw the movie, read the book and then I was hooked.  I had to read this novel.  Here was a writer, a Russian by birth, who had me asking myself questions about what I wanted in my life, what was important to me and what did I want to achieve in adulthood.

This book is not for everyone but it has been on my bookshelf several times.  Over the years I have bought this book, lent it out, and never had it returned, so I bought it again.  (I still do not understand why folks do not return books and have stopped lending them.)

So many books I read are just for pleasure.  This book was so much more than that for me.  As someone who grew up poor and knew what it was what like to eat food provided by welfare benefits (long before food stamps came along), I knew I wanted more in life than a handout.  I was smart and I knew I could achieve something in my life.

Encouraged by my Dad who had only an eighth grade education and my teachers, I found myself on a path to college and an adult life that as a child I could only see on TV and dream about.  I've been a union president in one job (as a medical technologist) and a public administrator in another and hope that I can be reasonable and see both sides of work issues.

This book has recently been made into a three-part movie and, while not great, it does provide a look into the ideas of Ayn Rand.

You may also like, or dislike, this interview from 1979 on Phil Donahue.

The home of the University of Michigan will likely not be a place for many Ayn Rand fans, being known as a bastion of liberal thought.  Nevertheless, it is also the home of Zingerman's Deli (A to Z already), and has a wonderful campus venue for musical concerts.  Just walking around the town itself and visiting the little shops is a nice afternoon adventure.  Nearby are the Matthaei Botanical Gardens.  Oh yeah, they also have a football team at the university.  Easily accessible for a day trip for anyone in the lower half of the lower peninsula.