H is for Hungary

In 2005 I decided to make a trip to Europe to see the castles of the former Austro-Hungarian Empire.  I would visit Budapest, Hungary along with Vienna, Austria and Prague, Czech Republic.

The Austro-Hungarian Empire existed from 1867 to October, 1918.  Its creation was the result of the Austro-Hungarian Compromise of 1867, under which the Habsburgs, who had been in power since the late 13th century, agreed to share power with the separate Hungarian government, dividing the territory of the former Austrian Empire between them.

After the end of World War I, the empire was dissolved.  Today the former empire has been divided into Austria, Hungary, Slovenia, Bosnia and Herzegovina, Croatia, the Czech Republic, Slovakia, large parts of Serbia and Romania, and smaller parts of Italy, Montenegro, Poland and the Ukraine.

My trip to Hungary began in Vienna.  I boarded an early morning train (think 5:30 am) to Budapest.  While I had previously traveled by train through much of Europe, the border crossing from Austria to Hungary was surely the most interesting.

When the Hungarian border guards boarded the train and asked for our passports, I was surprised at their demeanor and physical appearance.  It reminded me of old movies that were made during the Cold War and the time of the 'Iron Curtain'.  Even the female guard was intimidating.  We sat in stony silence while they looked us over and stamped our passports.

After the two-hour plus train ride, we arrived at the train station in Budapest.  The Keleti Station was absolutely gorgeous inside and was quite a surprise.


Armed with maps of the city, we followed our guide to a bus that would take us up to Castle Hill.  On the way we passed the Parliament Building on the Danube.  This view from the river side is much more attractive than the street side view. 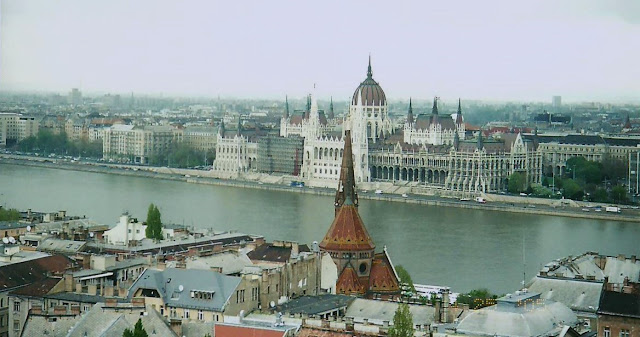 Buda Castle, also known as the Royal Palace, was first begun in the 13th century.  It was added to over the succeeding centuries and was finally completed in 1904.  The castle was badly damaged during World War II and restoration is ongoing.  The picture below shows damage up on the hill from bombing during the war.

Today, the castle is home to three museums.

Budapest also has some beautiful churches.  Among them are St. Stephen's. 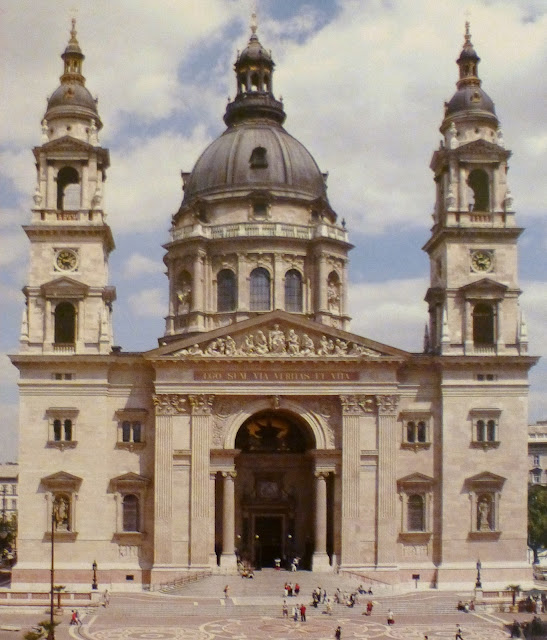 It is estimated that about one-third of Hungarians do not follow any religion or believe in God.  About half of the population is Roman Catholic.  The Catholic religion first became established in Hungary under the reign of King Stephen in the 10th century, hence the predominance of Catholic churches.
There is so much to see here.  There is a lovely city park filled with statues, the old bath houses, and you must visit the marketplace.

As much as I love old buildings and do not enjoy shopping, this was one time when I really enjoyed the markets.  The craft work was exquisite.  The people were so friendly.  I had a wonderful hour or so here just walking around. 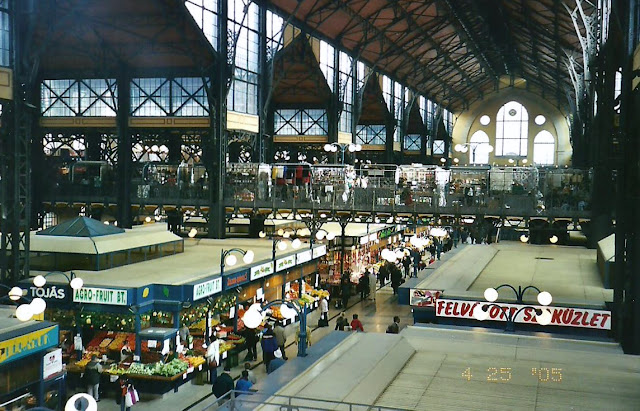 I purchased a lovely embroidered runner for my dining room table and use it every Easter.

This is a city I would like to visit again.  When I was there in 2005, there was so much being done to bring it back to its former glory.  Driving down the street you would see lovely old apartment buildings that had been turned into co-op units by the people living there.  They were cleaned-up and the grime that was there from neglect during the Soviet era was removed.  Next door there would be a dump.  I would love to go back and see how much progress has been made.

H is also for Halifax.
Labels: #atozchallenge, A to Z Challenge, Budapest, Hungary
Posted by Denise at 8:03 AM
Email ThisBlogThis!Share to TwitterShare to FacebookShare to Pinterest